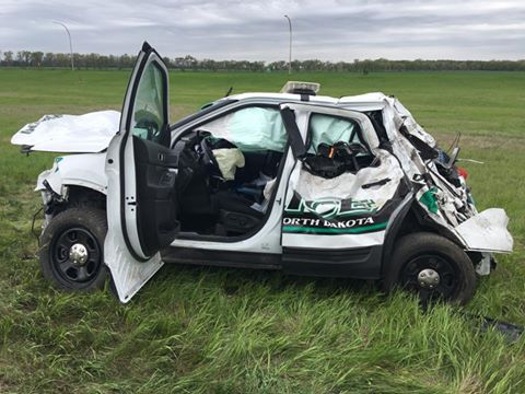 A drunken whore stole and wrecked a University of North Dakota police car this weekend, most likely because her daddy never loved her enough.

An apparently intoxicated young woman stole a University of North Dakota squad car on Sunday, driving it from Grand Forks to Crookston where she was involved in a crash so violent the vehicle’s engine broke free.

With a GPS device, the Grand Forks officers located the purloined police car — headed east on U.S. Highway 2 toward Crookston, about 25 miles away.

At about 9:20 a.m., the young woman lost control of the stolen squad on a Highway 2 curve, careening into a ditch at the intersection of U.S. Highway 75 near the University of Minnesota Crookston campus. The car rolled, and UND police pictures on Twitter show a crumpled vehicle, its engine laying on the grass.

Yet the driver, 23, suffered only minor injuries, according to the Minnesota State Patrol. She was not a UND student.

Unbelievable. If the driver was sober, they most likely would have been killed. Keep in mind, the vehicle pictured above was a 2015 Ford Explorer.

“God has a special providence for fools, drunkards, and the United States of America.” – Otto von Bismarck.