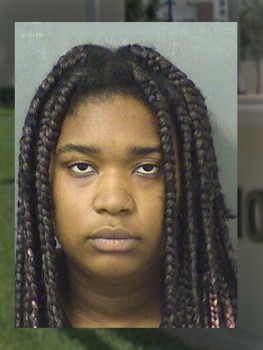 Natasia was out for a relaxing evening drive around the neighborhood, when she drove up on the sidewalk and struck a woman and shortly afterward, a six-year old boy. Natasia was too busy to stop, because she probably was late for a hair appointment.

According to police, 23-year-old Nastasia Snape was driving northbound in the area of 4000 North Ocean Boulevard. at approximately 10:20 p.m. when she drove her car off the road and onto a sidewalk. That’s when Snape hit the victim, who was walking southbound on the sidewalk.

The victim has been identified by authorities as Sandra Feuerstein. She was rushed to Delray Medical Center where she was pronounced dead.

Feuerstein was U.S. District Court Judge for the Eastern District of New York. Acting U.S. Attorney Mark J. Lesko said in a tweet, “As we mourn her tragic death, we also remember Judge Feuerstein’s unwavering commitment to justice and service to the people of our district and our nation.”

Police said Snape did not stop her car after hitting Feuerstein. She continued going, striking a 6-year-old boy who was crossing Ocean Boulevard in the crosswalk, before re-entering the roadway and continuing northbound.

Police said Snape exited the vehicle and while being treated by first responders, began screaming and fighting with medics, stating that she was “Harry Potter.”

Okay, I get your last name is Snape, but that doesn’t make you Harry Potter. Personally, I think you more closely resemble the Predator.

Meet Brandon Moore and Jonathan Ramos, Philadelphia’s favorite sons. Moore and Ramos thought it a smart idea to speed on a two-lane bridge across the Delaware River. Their idiocy resulted in an innocent man’s death.

Jonathan Ramos, 28, faces vehicular homicide, leaving the scene of a fatal accident, causing death while driving with a suspended license, and related charges. Brandon Moore, 23, was charged with vehicular homicide and two counts of endangering the welfare of a child.

When police arrived on the scene on Dec. 28 around 7 p.m., they found a heavily damaged Honda Civic and discovered that the driver had been killed by the collision. The driver was later identified as Gerardo Francisco Perez Martinez of Camden.

Bridge surveillance video and witness statements concluded that Moore, who was driving a 2018 Dodge Charger, struck the passenger side of Ramos’s 2015 Jeep Grand Cherokee, which led to the fatal collision with the Honda Civic, prosecutors said.

Prosecutors said Moore reached a top speed of 112 mph, and Ramos at one point was traveling at 106 mph where the speed limit is 45 mph.

The Tacony-Palmyra Bridge has barely enough room for cars passing each other. It’s always been a treacherous bridge, and no one in their right mind would drive 100mph there. It’s an invitation to disaster, but hey, Philadelphians are not known for their smarts.